One year ago, I arrived at LearnKey as the new, in-house Senior Instructor. And over the past year, I’ve filled this space with many blogs about current and upcoming courses. You may wonder, “How do you all figure out which courses to build?” Or, you may not be wondering that at all. But, one of my duties as Senior Instructor is to take in many different factors, such as industry trends, technologies in hot demand, client needs, and other factors typical to a company attempting to produce world-class certification courses and other types of courses, such as the character-building soft skills courses we released last week.

And with any schedule, sometimes things happen which cause a little shifting around of things schedule-wise. This is kind of like a chef thinking a recipe is great and then realizing a few tweaks need to be made here and there (not that I would really know much about that given my limited cooking repertoire). But in the computer training business, the only real constant schedule-wise is the frequent adjustments of the schedule. In our case, that means the course release schedule.

This combined with a few other changes in industry trends and certifications, along with our quest to always put out courses to give you the job-ready skills needed to succeed in this ever-changing technology landscape, has caused the following adjustments in the course release schedule. Here is what the rest of 2016 looks like, broken down by quarter:

Now, you may wonder “Where did the big new programming track go?” The programming track will be the big series we roll out early in 2017. Microsoft, as a matter of fact, is revamping their programming certification track. As they complete that process, we will pick that up and bring you a fun, interactive, and world-class programming track where you will learn by doing.

We recently released our first Exam Prep course. Our Project 2013 Exam Prep Course is complementary with our Project 2013 course with a purpose to provide students with the last bit of preparation and confidence they need to pass their certification exam.

Recently our Senior Instructor Jason Manibog wrote a blog about the great features of this course. We are excited to add more Exam Prep courses to our library. So keep an eye out for additional courses.

At LearnKey, we are always striving to produce the best and most innovative courses possible.  In line with this, we are excited to announce that we will be adding to our library some exam prep courses. These courses are short in nature (two hours or less) and are focused on one task– to help you get that last bit of confidence you need to pass a certification exam.

Over the next several months, many of our courses (especially the larger courses such as A+ 220-901 and A+ 220-902) will feature a session strictly devoted to final exam prep tips. Do keep in mind that these exam prep courses, or sessions, are not a replacement for the actual course. They are meant to be one of the final pieces of your obtaining a certification, along with, of course, post-test assessments, and real, hands-on practice in the application for which you are pursuing a certification.

Be on the lookout in the next month for the Project 2013 Exam Prep course. In the meantime, stay tuned to this spot to see news on future exam prep courses. You do not have to wait for this course to get solid exam prep advice. If you have not seen the blog we posted last week on test-taking tips, go check it out.

Recently, I did something I rarely do – I failed a test. You may think, “Big deal, it’s just one test, you’ll pass the next one,” and you would usually be right. Except this wasn’t just any test. It was a certification exam.

A couple of weeks ago, I began watching LearnKey’s Project 2013 training to prepare to take the Managing Projects with Microsoft Project 2013 certification exam. I watched the entire course, took notes, passed all of the pre- and post tests, and reviewed the training for the questions I had missed. I was a little nervous about taking the test, but I felt confident in using the software and figured the test would be pretty easy. I passed a couple of Adobe certification tests with no problems, and I thought the Project 2013 test would be similar.

The first thing I failed to take into account was the fact that I have been using Adobe software for nearly a decade. I probably know Photoshop and Dreamweaver better than any other software out there (with the possible exception of StarCraft or Age of Empires, but that’s a whole other ballgame).

Whenever someone asks me for advice on how to pass a certification exam, I always tell them one thing: Explore the software. Open up the menus, learn the features, figure things out on your own, and become proficient. No matter how good a training course is, there is no substitute for real-world experience. As I watched the training, I followed along in Project 2013 and learned enough to feel comfortable using it, but I didn’t spend very much time exploring the software on my own.

The second thing I failed to take into account was that the exam structure may not be the same as the Adobe exams I have taken in the past. Adobe exams place a heavy emphasis on lab-type questions where the students show they know the software by performing tasks in a simulated environment. I thought that even if I didn’t know everything about Project 2013, I could find my way around in the simulated environment.

As soon as I started the exam, I knew I was in trouble. The questions were all scenario-based and there was not a single simulation-based question in the entire exam. I had not prepared for these types of questions! The questions were also more difficult than I had anticipated. It’s not enough to be able to use the software; certification exams are geared toward expert users. I should have spend a lot more time exploring the software.

Exams can be a stressful experience, but that doesn’t mean you have to go in unprepared. LearnKey and Tom Carpenter, president of SysEdCo and frequent LearnKey author, have teamed up to create a short course to help test takers understand two things: 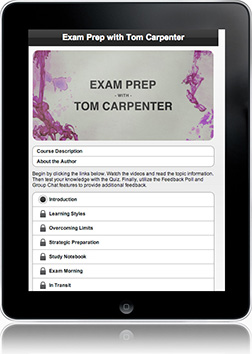 Exam Prep with Tom Carpenter, created on the LearnCast platform, is broken into eight sections covering three main topics: preparation techniques, tips for retaining information, and best practices for taking exams. In this course, you will learn how to best prepare and take a technical exam leading to success.

Whether you are taking an exam for a class or preparing for industry certification, this course can provide you with tricks for retaining important information and give you valuable insights into the different ways people learn. Topics include Overcoming Limits, Strategic Preparation, and Dealing with Stress.

Exam Prep with Tom Carpenter can be purchased through the new LearnKey app, now available in the iTunes app store.