This article is the first in a three-part series written by LearnKey’s Online Content and Social Media Manager about achieving industry certification. Check back in a couple of weeks for Part 2. 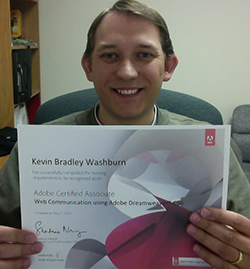 Earlier this month, I earned the Adobe Certified Associate Web Communication using Adobe Dreamweaver® CS6 certification. I have used Dreamweaver for years, but I had never really considered trying to get certified. In the eight years I have worked for LearnKey I have toyed with the idea, but it wasn’t until last summer that I seriously considered taking the exam.

Last summer, LearnKey began a push toward releasing courses in a widescreen format instead of the standard 4:3 ratio we have always used. At the time, we had just finished filming about half of our Adobe Creative Suite 6 courses in 4:3 and the decision was made that these courses would need recaptured into the new widescreen format.

I was already in the process of converting our most recent courses into a mobile-friendly format, so the task of widescreen recapturing was rolled into my production processes. In the hours I spent listening to audio, following each expert’s mouse movements, and editing the recaptured footage together, the idea occurred to me that now would be the perfect time to finally get ACA certified.

In the eight years I have worked for LearnKey, the program I have used more than any other is Adobe Photoshop. While there have been changes from version to version the basic program has stayed the same, so I began my quest for certification with the ACA Visual Communication using Adobe Photoshop CS6 exam. Since I had just finished recapturing and editing the Photoshop CS6 course, I didn’t feel the need to watch the video training for a fourth time. After passing LearnKey’s Photoshop pre-tests, post-tests, and MasterExam, I felt fully confident in taking the ACA exam.

The Adobe Certified Associate is an entry-level certification. After using Photoshop for so many years I just know how to do certain things and I was able to answer many of the exam questions without even thinking about them. I learned two things from taking the exam: