A couple of months ago, Scott Walker and I took a trip to Florida to help high school teachers in Duval County Public Schools to become ACA certified in Photoshop CC. Last week, we found ourselves back in Duval helping a group of forty-seven middle school teachers become ACA certified in Photoshop CS6. When we arrived at the school Tuesday morning, we were also asked to introduce them to the IC3 training. By the end of the week, all but seven teachers had passed the Photoshop ACA exam, with several also receiving their IC3 certifications.

Unlike the group we worked with in October, many of the teachers in our training last week had never used Photoshop before. In fact, most of them were not even CTE teachers! It was a new experience working with people who were unfamiliar with the software, and it gave me a greater appreciation for what these teachers must go through every year when they are given a new group of students.

We spent the first day walking the teachers through the Photoshop and IC3 training on OnlineExpert and showing them the student workbooks, then we asked them to go home that night and practice using Photoshop by doing some of the projects in the workbooks.

On Wednesday, LaQuanda Paschal, one of the teachers we worked with in October, gave a presentation to demonstrate some of the techniques she uses in class to help her students pass the Photoshop certification exam. Between studying Tuesday night and LaQuanda’s presentation, about half of the teachers felt ready to test on Wednesday afternoon and most of those passed that day! 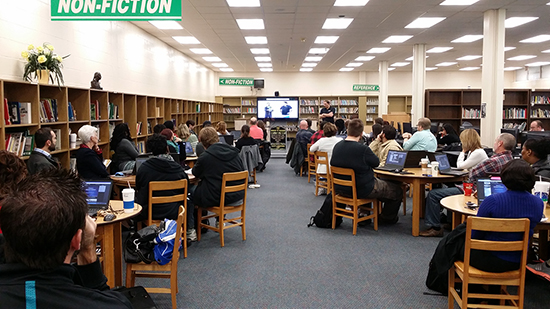 At LearnKey we are super excited about producing the new IC3 GS5 training and assessments through our video-based training courseware that covers 100% of the objectives to help you learn and pass the Certiport IC3 certification exam.

Our expert knows IC3, which is why we are proud to introduce Wyett Ihler as our IC3 GS5 expert for this course, and the entire team members supporting him in the production of this course are all IC3 certified! Wyett is a certified LearnKey expert who has assisted in the publishing process on hundreds of LearnKey courses. His kind spirit & knowledge coupled with the way he communicates are great qualities that will come across throughout the course.

Another positive about this production is our IC3 GS5 New and Improved Course is based on feedback from students and teachers so we can achieve our mission, which is to drive the ultimate learning experience! Benefits of IC3 GS5 are:

At LearnKey, a Better Learning Systems company, we will continue to work with industry experts and partners to ensure our courseware has the perfect mix of training, pre and post assessments, and exam simulations to meet not only our education (K-12 & Higher Ed) clients but also industry teachers and military students so they can obtain their dream job and career!

Coming soon will be some back stories on what the author, writers, designers, and production team are doing to make this real fun too!

Not long ago, LearnKey released a course on IC3 GS4 with Spanish audio and English text. The course was designed to allow Spanish speaking students to learn computing skills by hearing their native language while seeing the computer terms in English.

A couple of months ago, the decision was made to revamp this course by converting all of the graphics into Spanish. This new course is designed to allow Spanish speaking students to learn computing skills by hearing and seeing computer terms and practices in full Spanish. As a result of this decision, I spent most of the last two weeks reviewing the English version of IC3 and recapturing all of the screen captures using Spanish versions of Microsoft Office and the Adobe Creative Suite.

I have captured several courses over the years, including both the full screen and widescreen versions of English IC3 GS4, but this experience was a little different and more complicated than what I had gone through in the past.

To begin with, I don’t speak Spanish. When I was in high school and had to choose a foreign language class, I chose to take French. I was heavily involved in theater and thought French would serve me better in the performing arts than Spanish. About the only Spanish I know is the little bits and pieces I picked up watching “Dora the Explorer” with my daughter nearly a decade ago.

After getting the Spanish versions of Windows and all the software I needed installed, it took me a little while to get into the rhythm of things. Whenever I clicked on the wrong items, I couldn’t read the screen to tell where I was and how to get back to where I wanted to be. Luckily I was able to use the English course as a reference, and I eventually learned that if I worked really hard ahead of time to memorize the look of the icons I needed it was easier not to get lost. I also found that using an online translator was invaluable. The translations probably weren’t perfect, but they were close enough to help me understand what the buttons and error messages said whenever I found myself off course.

Now before anyone out there gets the wrong idea about this course, I’m just a minor cog in the great machine which is working on this course. After I finished the screen captures, I sent them on to the design team, several members of which are fluent in Spanish. My screen captures will be thoroughly reviewed and any mistakes I may have made will be sent back for me to recapture. After the design team finishes reviewing my files and translating the rest of the course graphics into Spanish, the course will be put through a rigorous quality control process to catch any leftover mistakes.

Stay tuned for the release of IC3 Global Standard 4 – Full Spanish in the next couple of months.

There are a variety of different definitions around being a team player, but the one that stands out to me recently is the one demonstrated last month by Carole Heaton in our LearnKey video production office in Cedar City, UT. It is what made her our employee of the month for September 2012. Our team has just completed the roll out of: A+  2012, IC³ GS4 and our Career Readiness bundle of courses (14 in total). At the last minute, we identified several ways to enhance the learning experience for A+ 2012 which meant we needed people to work overtime. When we needed help the most to meet our deadlines, it was Carole Heaton who stepped up big time.

Everyone in our Cedar office had been working overtime hours, everyone was tired. These projects needed to be delivered on time and Carole was willing to go the extra mile and work practically around the clock to help us meet our deadlines. Here is what her manager had to say when he nominated her for employee of the month: 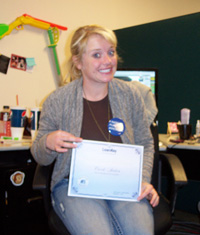 “It seems like I can come into the office at just about any time, day or night, and find Carole either at her desk or online on my IM. She has put in more hours over the last month than any other member of her team. She is always willing to do whatever is asked of her as soon as it is asked, which has provided that level of Ease in getting fixes and files done on a tight deadline. I can always Trust that her files will look good and the fixes she is asked to do will be done correctly. She is always a positive force in the office, despite doing the lion’s share of work, and she can always be counted on to have a ready smile and a laugh available.”

Everyday in some way shape or form we communicate about our core values – Ease, Value and Trust. Carole clearly demonstrated all three of them by making it easier for us to meet our deadlines, valuing the importance of these courses and what it meant to get them out on time, and trusting the broader team that these improvements did merit being implemented for the benefit of our customers/learners. I thank you Carole for all your efforts.