I’ve often heard it said that, “from little things, great things grow.” Such was the case with LearnKey’s Word 2013 ASL course. While attending the ACTE convention in Las Vegas last December a chance encounter with an educator interested in online training for her deaf students became that “little thing.”

On the production side of LearnKey we’re always looking for ways to improve our product, ways to make it more useful for our users, and more efficient to produce. After the convention in Vegas I was asked to explore the possibility of producing a course in American Sign Language. It is challenges like these—challenges of the unexplored—that inspire our team. As the team wrapped up a busy production year and prepared for a relaxing holiday season we felt like we had outlined the needs from a process standpoint. We had chosen our course (Word 2013), we had figured out the logistics of incorporating an interpreter into the video, we had the transcript for the course, we had even come up with several options for making the filming process relatively simple; all we needed now was an interpreter.

Honestly I wasn’t sure what to expect when searching for an interpreter. I have spent the last several years searching out experts in various computer fields for LearnKey’s projects and in some ways that is relatively simple—at least from the finding someone who is certified aspect. For this search I started where I always start with a new project; I talked with people I knew who knew more about this than I. Cedar City is home to the Utah Shakespeare Festival. I have had the opportunity to attend several of the plays in years past and as chance would have it I have attended shows with sign language interpreters. I reached out to the Festival and was given contact information for Amelia Williams. I reached out via email and hoped for the best. I had no idea how “best” this would turn out to be. 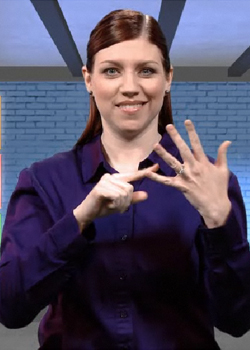 Amelia and I corresponded via email several times and she expressed an interest in the project and agreed to a phone call to further explore what LearnKey was looking for. Now, it should be stated at this point that I have a tendency to get pretty passionate about the projects we do and this project had become one that I was very excited about. Needless to say I was somewhat giddy when I spoke with Amelia on the phone. She was kind enough to look past my overenthusiastic pitch and see the value in the course we wanted to produce. She agreed to work with LearnKey to put together a 20 minute proof-of-concept to see if producing a course in ASL would even be viable.

In the time it took her to prepare the material I had the opportunity to become more educated about what it takes to be an interpreter. I had never considered that there were certifications for interpreters—I suppose I had simply never put any thought in that direction. I learned that it isn’t easy to become certified. It is a rigorous and oftentimes expensive process. I learned that there are national and state-level certifications that can consist of written tests, interviews, and performance tests. It wasn’t until I had this basic understanding that I realized how fortunate we were to find Amelia who holds both state and national certifications.

There was a great deal of energy in the studio when time for filming the proof finally rolled around. The studio crew was excited to try something new as was Amelia. With very little fuss all was set and the camera was rolling. Within the first 30 seconds, without saying anything, we all knew we had something special. We were so sure about this project that before Amelia left the studio we had booked her to film the remaining portions of the course.

From a chance conversation in Las Vegas convention center grew our first course in American Sign Language. We’re proud of Word 2013 ASL and are looking forward to our next foray into ASL.