Personally, I usually use Chrome for the majority of my web browsing. Being LearnKey’s webmaster though, I need to at least have a copy of the major browsers around to test things, and I recently installed an update to Firefox 5. Our graphic designer Kari pointed out a pretty cool and useful feature Firefox recently added to their updates – Tab Groups.

Say you’re working on a few different projects at once, and you don’t want to mix up the different tabs you have open between projects. You could open a new browser window and separate them that way, but Firefox’s Tab Groups feature lets you keep it all in one window, and switch between groups easily. It’s fairly similar to the Spaces feature in Mac OS X.

Speaking of Mac OS X, we’re going to be looking at the Mac version of Firefox 5 in the following examples. Fair warning, I got a little screenshot happy for this one.

To use Tab Groups, open Firefox and open a few different tabs. Go to different websites in these tabs, and once they’re all loaded and ready to go, you’re going to want to look for the little down-facing arrow in the top right corner. 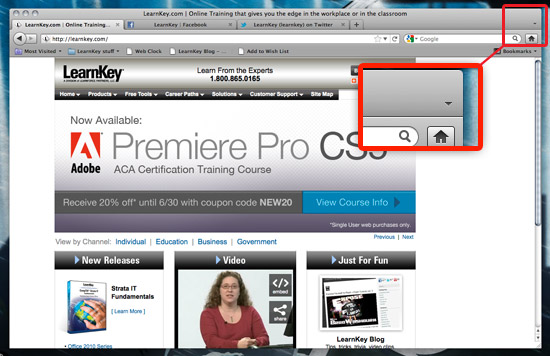 Click that arrow, and you’re going to see a drop-down menu with all of your open tabs in it. You’ll also see another option, called Tab Groups. Click on it.

You’ll be taken to the Tab Groups area, which at first just looks like a really big blank area with some thumbnail images on it. Those are your open tabs, and at the moment they are in one single group.

Here is where it gets interesting. Click and drag anywhere in the big empty space – you just created a new group! From here you can name your different groups, re-size and rearrange them for your purposes, and move tabs between your groups. In my example, I have learnkey.com open in one tab, and my other two tabs are LearnKey’s Facebook page and Twitter feed. Say I wanted to group my social media tabs together, but leave learnkey.com on its own – you just drag the tabs over to your new group. 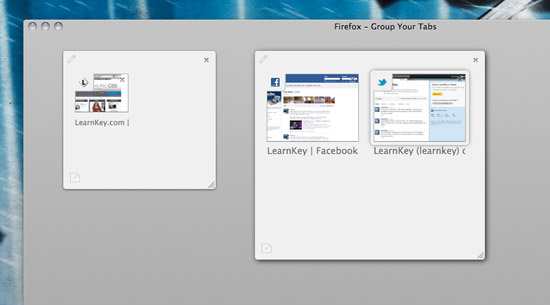 You’re done! Just click on any of the tabs to switch to that group, and as far as anyone looking at your screen is concerned, you only have the tabs in your current group open. This feature is great for multitaskers who have a lot of tabs open, but don’t need them all at the same time. I am not able to comment on whether or not this is good for quickly switching to a new tab group before your boss sees you on YouTube, because we here at LearnKey would not condone such behavior, regardless of how theoretically possible it is. 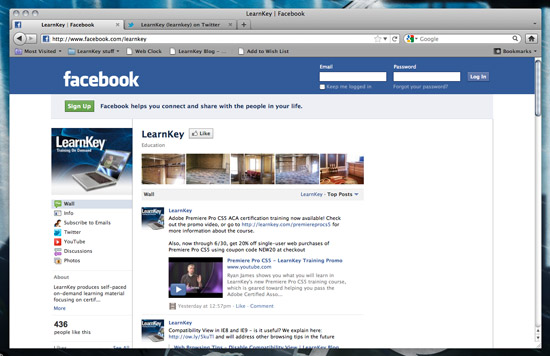 “What? I wasn’t looking at LOLcats, I was just checking the stats on our Facebook page”

As the Webmaster/Web Designer, I have been providing the internets with awesomeness from learnkey.com and our social networks since August 2008. View all posts by Colin